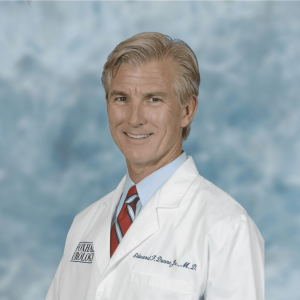 Dr. Dunne grew up with 7 sisters in Southern California. He received his Bachelor of Science in Biochemistry from Loyola Marymount University in Los Angeles, California. In 1984 he received his medical degree from Georgetown University where he also completed his surgical and urology residencies. During his residency Dr. Dunne had the opportunity to treat kidney stone patients with one of the first lithotripsy machines in the United States. As Chief Resident, Dr. Dunne authored a chapter on urologic surgery in a major surgical textbook. Dr. Dunne also received a research grant to for a Prostate Cancer Project. He was a member of the National Jesuit Honor Society, The Alpha Omega Alpha Honor Society and The Sigma Chi –Scientific Research Society of America.

In 1990 Dr. Dunne started practicing in Sarasota, Florida, first at M.D. Urology Specialists, Inc and then at the Urology Treatment Center. While on staff at Sarasota Memorial Hospital he served as Chief of Urology and then several years later he served as Chief of Surgery at the same institution. While practicing in Sarasota Dr. Dunne was actively involved in over 15 research studies and had several publications related to urological disease.
In 2001 Dr. Dunne returned to DC, where he joined Foxhall Urology. He is a member of the clinical staff at Georgetown University and is currently the Chief of Urology at Sibley Memorial Hospital. Dr. Dunne also performs outpatient surgery at Massachusetts Avenue Surgery Center.

Dr. Dunne had been recognized in every Washingtonian Top Doc Issue since 2005. He has also been selected as a Top Doctor in Checkbook Magazine as well named in Best Docs.